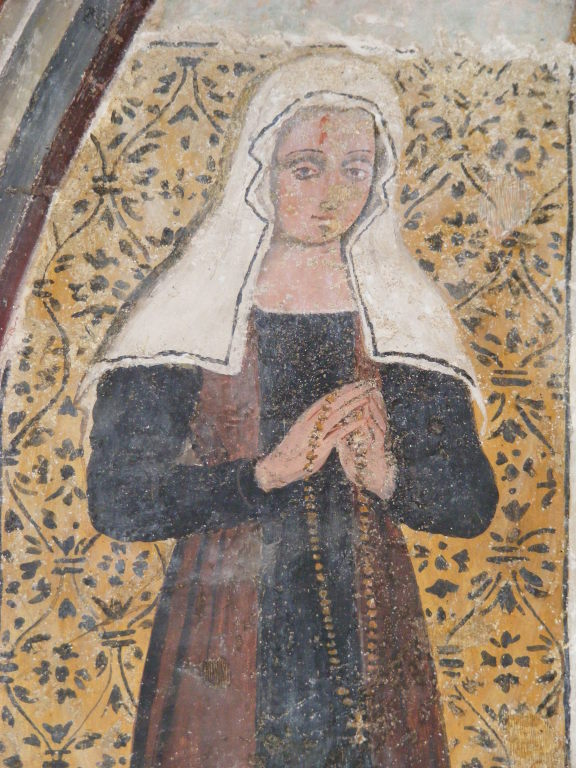 Rita was born in 1381, in Roccaporena, Italy. In 1399, she was joined in marriage to Paolo Mancini, and two sons were born to them. One day, on his     way home from work, Paolo was ambushed and killed. Rita’s prayer prevented her sons from avenging their father’s death. She then had the difficult mission of establishing peace between the hostile parties of Cascia.

Now free to follow the desired vocation of her youth, she joined the Augustinian nuns of Saint Mary Magdalene Monastery. In 1417, at the age of 36, Rita consecrated her life to God. For the next 49 years she gave herself wholeheartedly to prayer and works of charity, caring for the sick and needy, and working as a peacemaker among the citizens of Cascia. In 1422, Rita received a stigmatization, a small wound on her forehead, as though a thorn had penetrated her own flesh. She bore this for the remainder of her life.

During the last four years of her life, Rita was confined to bed and was able to eat so little that she was practically sustained on the Eucharist alone. One of those who visited her some months before her death – a relative from her hometown of Roccaporena – was privileged to witness firsthand the extraordinary things wrought by Rita’s requests. When asked whether she had any special desires, Rita asked only that a rose from the garden of her parent’s home be brought to her. It was a small favor to ask, but quite an impossible one to grant in the month of January! Nevertheless, on returning home the woman discovered, much to her amazement, a single, brightly-colored blossom on the bush where the nun said it would be. Picking it, she returned immediately to the monastery and presented it to Rita, who gave thanks to God for this sign of His love. Thus the saint of the thorn became the advocate of all those whose own requests seem impossible as well.

Having faithfully and lovingly responded to God’s many invitations to her in the course of her seventy-six years, Rita returned to him in peace on May 22, 1457. As a special sign of God’s favor, granted to only a small number of those the Church has raised to sainthood, Rita’s body has remained incorrupt over the centuries. It is venerated today in the shrine next to the monastery in Cascia, which now bears her name. Her feast is observed on the anniversary of her death.

Rita is invoked as the “Saint of the Impossible” because of the exemplary way in which she met with the many difficulties and crosses in her own life, and turned them into instruments of growth in holiness before God. Saint Rita leaves with us her message of forgiveness, peace, love, suffering, humility and joy.