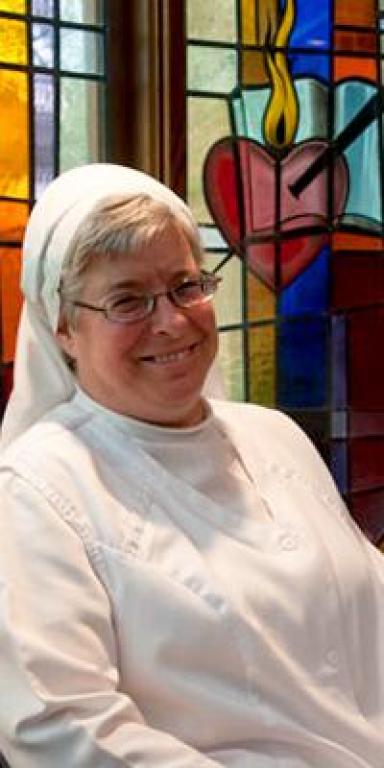 My name is Sister Clare Marie Rohutny, O.S.A. My vocation story is one of bumps and lumps, so to speak. When I was five or seven years old, I knew I wanted to become a Sister. We had Dominican Sisters who taught us in grade school at St. Anthony of Padua School in Kenosha, Wisconsin. I admired their serenity, peace, and teaching abilities. I also admired their flowing white habit with an attached large rosary at the belt, and the black veil. They seemed to glide noisily and gracefully when they went by. I wanted to pray and be close to God as they were. The rose and the cross became the symbols associated with my desire to become a Sister. The rose, my flower of love for Jesus, and the cross, my desire to serve Him. Little did I know then the significance of the rose as a symbol in my eventual vocation to the Sisters of Saint Rita.

By age twelve I consecrated myself in private to Jesus. I wanted to be wholly His. I was sure I had a vocation since I was seven years old.

The Sisters at my grade school wanted me to join them after eighth grade, but my father refused. He asked me to wait until I had finished my education and had a job. I went to college to become a teacher, but at that time I felt uncomfortable with some of the changes that occurred after Vatican II, so I put my desire to be a Sister on hold. Religious sisters were experiencing changes, experimentation, and transition. I wanted to be a public witness living in community in a Convent.

After teaching for awhile I went to Marquette University in Milwaukee, Wisconsin for further studies. My Jesuit adviser, who later became a lifelong friend, advised me to follow my dream of becoming a Sister. Drawn to St. Francis of Assisi and teaching, I entered the Franciscans when I was in my early thirties. However, although my attraction to Francis was strong, I did not feel as if that way of religious life was a fit for me. My head and my heart didn’t come together. I continued to be attracted to that life for a while but every time I tried, something didn’t seem right. Thus began a journey of discernment, prayer, self-examination, and spiritual direction.

When I was in my forties, my uncle showed me a church bulletin with an advertisement for the Sisters of St. Rita, an Augustinian Community. This was a bit unusual for my uncle to give me the church bulletin. I read it and was attracted to the picture of the Sisters. I liked the way they looked, their smiles and friendliness. Their habits and veil seemed modern yet traditional. They also had a free video advertised! Well, my sense of getting a bargain was caught, and I called them. I visited them several times at St. Rita’s Convent, stayed overnight, and talked with them. I liked what I saw and heard about religious life in community. They seemed so human. The Superior, Sr. Irene, suggested I give them a try. I did. I was a bit hesitant to try these Augustinians, since I was a teacher, and they are in health care for seniors in Racine, Wisconsin, near my birth home. Yet some of the Sisters were also involved in catechesis, religious education. So it would be possible to teach, and if I wanted to change, I could also remain in religious education which I had done for more than twenty years. The Sisters were so inviting and real, that I came. And some seventeen years later, I am still here! On November 11, 2002, I professed final vows as a Sister of St. Rita, following the Rule of St. Augustine.

My ministry has changed since I came; but as our mission as religious is fostering and caring for families, I still share in the wide ministry of caring for and about people, the People of God.

The journey as an Augustinian Sister, to be of one mind and heart on our way to God, is not always easy. There is no perfect community. I’m in it, so how could it be perfect! (You ought to taste my “cooking” and you’d see one example of one of my imperfections, as well as my vacuuming obsession as a novice. The postulant with me called me the “Vacuum Queen”.) The road is sometimes uneven. However, the journey itself is the road to God, to holiness and oneness of mind and heart. I have found that my head and heart are one because I have discovered that being human, with all its joys and messiness, is where I find God. That is the prime charism of being an Augustinian, to let the grace of God call, capture and transform who we are together. I have been accepted as I am by God and my Sisters. And I have learned to accept them. No matter how human we are, with all our foibles and differences, we forgive, stay with, and hang in there for each other. Our first calling as Augustinian religious is to be God to each other in Community, just as were are, warts and all. And as Sisters of Saint Rita, we are constantly called and challenged to forgive and love, as did this Saint of Impossible Causes.

I don’t need to wear a hair shirt or look for unusual penances to become holy. Living in Community, with my humanity and others’ is the challenge of my Catholic vocation to become loving. Rubbing elbows, so to speak, of various personalities, experiences, and background, is the way we become polished in God’s refinery, wheat broken and blessed. This is where my heart is. And guess what? The cross we wear as Sisters of St. Rita is a cross broken in the middle, where a rose grows out of the split of the cross. The cross and the rose, symbols of my youthful desire to be a Sister. Is God good or what!