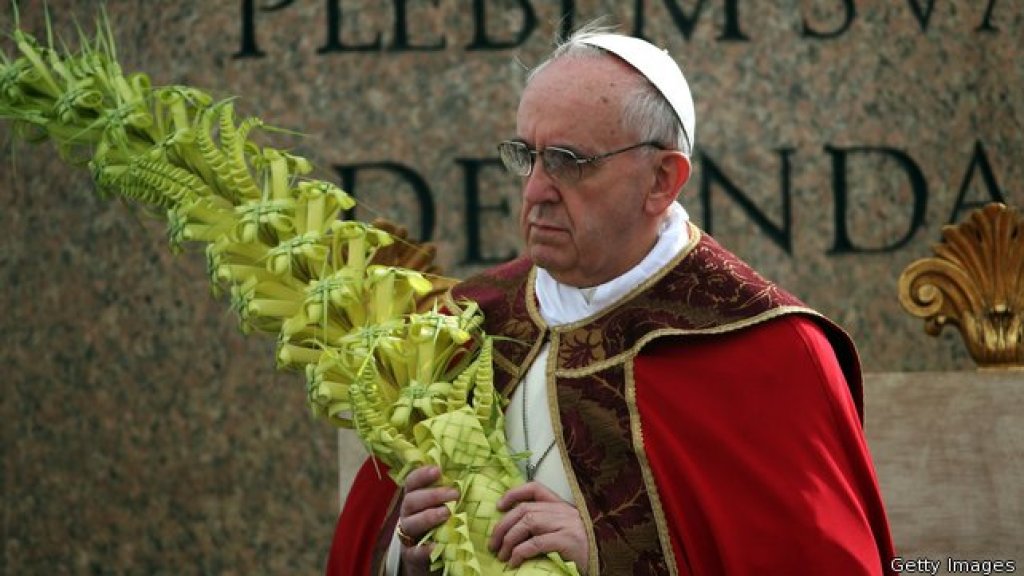 Vatican City, Apr 14, 2019 - On Palm Sunday, Pope Francis warned against the temptation of “triumphalism,” encouraging Catholics to follow Jesus’s way of humility and obedience exemplified in His Passion.

“Joyful acclamations at Jesus’ entrance into Jerusalem, followed by his humiliation. Festive cries followed by brutal torture. This twofold mystery accompanies our entrance into Holy Week each year,” Pope Francis said in his homily April 14.

The pope prayed for the grace “to follow in faith our Savior’s example of humility, to heed his lesson of patient suffering, and thus to merit a share in his victory over the spirit of evil.”

Processing through the crowds with palms and olive branches in St. Peter’s Square for the first liturgy of Holy Week, Pope Francis said that Christ responded to the temptation of “triumphalism” in His entrance into Jerusalem by “holding fast to his own way, the way of humility.”

Pope Francis explained that by “triumphalism” he means engaging in “shortcuts and false compromises,” without being “forged in the crucible of the cross.”

“Brothers and sisters, there is no negotiating with the cross: one either embraces it or rejects it,” Francis said.

“True triumph involves making room for God and the only way to do that is by stripping oneself, by self-emptying. To remain silent, to pray, to accept humiliation,” he continued.

“Jesus shows us how to face moments of difficulty” with “confident abandonment to the Father and to his saving will, which bestows life and mercy,” the pope explained.

The pope emphasized the importance of “the silence of Jesus” throughout His Passion. “By our silent witness in prayer we give ourselves and others ‘an accounting for the hope that is within,’” he said.

“Our place of safety will be beneath the mantle of the holy Mother of God,” Francis explained. “In the footsteps of Mary, countless holy men and women have followed Jesus on the path of humility and obedience.”

“In this way, triumphalism, destroyed by the abasement of Jesus, was likewise destroyed in the heart of his Mother. Both kept silent,” he said.

He continued, “when you hear that he is asking you to renounce yourselves, to let yourselves be stripped of every security, and to entrust yourselves completely to our Father in heaven, then rejoice and exult! You are on the path of the kingdom of God.”